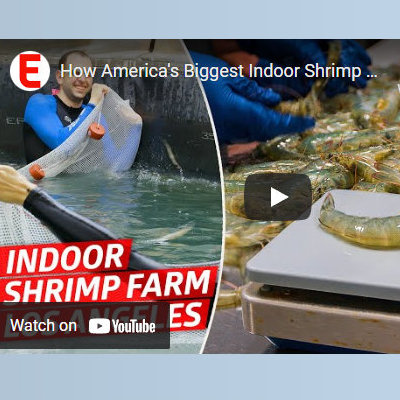 Food which they are comfortable eating. Sadly much of what we do eat struggles to tick all the boxes. This is becoming clearer as we become better informed. These videos demonstrate it is possible to farm food without destroying the environment.

Many food industries have a problem namely they are not very sustainable.

When the human population was measured in very low numbers by todays standards there was not a problem as the world population increased we had to transform from hunter gathers to farmers but some sections have not transformed that well.

Below are some examples on YouTube where better practice is being adopted, one can only hope that by sharing ideas they will become more the norm rather than the exception.

Fishing is an example where IMHO if more management was in place the worlds fish stocks would not be so threatened.

In this example prawns AKA shrimps are being farmed in Los Angeles by a company called Transparent Sea Farm.

I like salmon but it does concern me that salmon farming as practiced around the much of the world is a major polluter of the seas.

Does it have to be this way?

This video shows that with some thought you can farm salmon sustainably without antibiotics and without damaging the seabed, hopefully in the not too distant future this will become the norm and not the exception.

One of the interesting parts is how the mussels which are too small to be commercially viable are recycled back in to the farming process. Sadly too often anything which comes out of the sea if it is not “right” it is discarded dead.